In the process of leasing the 3515 space our landlord had the shop A/C's put into working condition.

They also provided an estimate for an annual service contract as required by our lease. The recipt for the work and the estimate can be found in the PS1 google drive under facilities/HVAC.

This makes some of what is below no longer relevant.

There is a heat pump / air handler cooling system mounted on the ceiling and roof.

These are some very vague and poorly collated notes about that:

heat pump stat - but we aren't using the heat pump for heating, so we don't even need the fancy board since it's for defrost. we use it when we're cooling only. Right now, the wire from the roof is wired to make it so when power is on (7,9,11) PP1-1 - it runs all the time. There is no relay control of it that's active. the red wire in the control wire will throw a relay on and off to control the heat pump.

but, we don't need to use the heat mode of the unit and it's not wired upstairs for it at the moment, so we should set up the filtrete like so -

take off silver jumper, use RC and Y. (normal cooling, not heat pump cooling - the transformer is ganged right to the relay up top). thin red wire on the transformer goes to RC thick red wire from the roof goes to Y blue and white should be stuck together like they are.

we also need to put the air handler/fan unit on the coil that hangs down (big tan thing) run always if the heat pump is on, since it will ice up otherwise. However, it's also useful when things aren't in cooling mode for running some air from outside to the shop, so we want a switch that can manually trigger the relay that will be controlling the air handler.

According to Everrett, the AC in the shop froze up sometime between mid june and late april 2014. Eric Stein noted that the switch box on the bottom of the shop AC was open in mid june. That's probably not good. Presumably, nobody read the HVAC wiki page before trying to do things with HVAC. For shame!

Service was provided by "My Guy HVAC" They were on time and professional. The only issue was the technician struggled a little with the unconventional connections in the shop system. The were working on a flat service fee so no extra cost was incurred because of his confusion.

Above notes are accurate except there is no thermostat at all and the unit doesn't' supply outside air. The unit on the roof is wired for cooling only. Connect the small (22ga?) red wires to the left of pp1-1 to trigger the contacter for the compressor on the roof. There is no control board for the air handler and the blower is wired directly to the switches. The switches on the bottom of the air handler are each switching one leg of the 240v circuit for the blower. This should be changed to a DPST switch at a minimum. A disconnect would be better. The blower circuit is taken from 2 legs of the 3 phase circuit used for the compressor. This is a potential safety issue. As well as confusing as one would expect a separate breaker for the blower. The service tech indicated that the unit is low on refrigerant, estimated 2-3 lbs. Due to the other issues, I chose not to have the the refrigerant topped off at this time.The unit uses R-22 refrigerant.

My recommendation is that we leave the unit alone unless or until there is a 24v control added to the blower, a separate circuit with a disconnect is run to the blower and a filter setup is arranged.

There is an HVAC unit in the comms/hvac closet upstairs near the side stairs.

Service was provided by "My Guy HVAC" They were on time and professional.

Unit was low by 3 lbs of R-22 refrigerant. Likely has a small leak. Unit was inspected and topped off. Recommended that we change the filter every 60-90 days.

Service was again provided by "My Guy HVAC". Inspected electric and coil, looked clean and good. Checked filter, cycled inside. Filter needs replacing. They added 2 lbs R-22 refrigerant to get it back up to pressure. Cycled the system. They added a can of Easy Seal to hopefully seal the leak, but they cannot provide a guarantee that it will work. We will know for sure if it worked by next year. If it did not work, we can just continue to top off the refrigerant every year, which will probably cost about $200-$300 per year. This is considerably less expensive than buying a new unit, I think. This time they recommended that we change the filter every 30 days. I'm gonna pick up a few from Home Depot later today.

The building has three heating zones that are separately controlled. The room in the back left corner of the main room (looking toward the back of the building) contains our boiler and our hot water tank.

The first zone is a hot-water circuit from the "north-side" boiler (the larger one at the back of the boiler room) serving the back stairs, the 3D/Lasers Room, the Lounge, and the upstairs areas (Electronics and Arts). The thermostat for this zone is in the 3D/Lasers room and controls the circulator for this circuit. Note that turning on the thermostat in the 3D room will also heat the upstairs. Although the radiators upstairs are controlled by a thermostatic valve, this doesn't seem to work well and it's possible to overheat the upstairs, especially if the 3D room's windows are open to provide makeup air to the lasers.

Upstairs also has forced-air heat, separate from the rest of the space. The thermostat is by the closet across from the top of the front stairs, in the craft area. The heat (and cooling) are in the closet.

The second zone is also served from the "north-side" boiler on a second hot water circuit. This circuit feeds the four unit heaters in the north shop (General, Cold Metals, and Small Metals). The unit heaters are set up so that they will not start until the water going through them reaches a certain temperature. For this reason, it will take a while (sometimes hours) for them to start when the thermostat is turned on.

The thermostat is located in the Cold Metals area near the lathes. The non-functioning wifi thermostat was replaced by a "dumb" thermostat in the fall of 2014. This thermostat controls the circulator for this area. This is a totally separate thermostat from the air conditioner thermostat (near the breaker panels).

This hot water circuit has a high point air bleeder valve near the unit heater over the kitchen and at least one low point drain in the kitchen under the sink.

Around the end of December 2015 the heat in the shop stopped working. the boiler, thermostat and the circulating pump all seemed in working order. Most likely cause was determined to be an 'air lock' preventing circulation. There is a valve at the high point of the piping, it's at the heat exchanger above the kitchen just north of the door to the shop. The boiler was switched off, a hose was run from the valve to the kitchen sink and the valve was opened. Nothing happened. The gauge on the boiler showed 12 psi and it was expected that the automatic makeup water valve would open and add water to the system forcing any trapped air out. This did not happen. Water was added manually until a steady flow was draining into the kitchen sink. The air bleed valve was closed and the system was turned back on. The system was run until all four heat exchangers in the shop came on. Then the process was repeated and more air was purged. It was also noted that prior to starting the process that the expansion tank was empty although the boiler was hot. The system was left running with a boiler pressure of 18psi and the expansion tank about 1/8 full.

There is a second, smaller boiler, with a second feed valve, expansion tank, and circulating pump, for the south shop (Woods/Hot Metals). The boiler is on the opposite wall from the first (north shop) boiler. The hot water circuit from this boiler feeds two unit heaters, one in the Wood Shop and one in Hot Metals. Again, these will not switch on until the water going through is hot enough. This circuit usually heats up fairly quickly, though.

The thermostat for this zone is in the middle of the Wood Shop, right next to the (separate) air conditioner thermostat.

There is a large powered air intake mounted above the boiler room and the hot metal area. The landlord indicated (7/1/14) that this system needs to be operational to satisfy city inspection. The electrical circuit (3 phase) for this unit was disconnected and the 240v portion was relocated to the compressor. In addition, the wiring from the disconnect to the magnetic motor starter was removed. This probably occurred shortly after we occupied the building. The disconnect immediately below the motor was relocated to the mill 2/14. The heating feature of this intake was disconnected by the landlord prior to our arrival.

Failure to make this operational may result in fines.

2 powered vents. Switched at the back of the shop by the electrical panels.

The south unit is not operational and needs diagnosis and repair. 7/9/14 with the switch on a humming noise could be heard on the roof. I suspect a stuck fan or a belt issue. The mushroom cap on the roof can be removed with an adjustable wrench for access.

The north unit is operational and seems to be thermostatically controlled (not verified). Unknown size or capacity.

North wall. 4" DO NOT USE! It is a code violation to vent in this manner.

Powered exhaust, north wall. Switched in proximity. Near the compressor.

Some of our HVAC systems require regular maintenance. 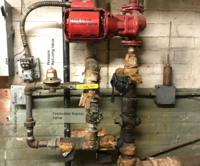 The water supply arrangement on the boiler for the north shop.

The boilers are connected to the incoming water supply in the usual way, with pressure reducing valves. The PRV for the south-side boiler has a bypass lever on it, which can be pulled up to force water in, but it is supposed to add water automatically if needed. This lever should only be pulled up for major service, like flushing the system, or if the PRV doesn't work for some reason.

The north-side boiler's pressure reducing valve doesn't have a bypass lever. Instead, it has a separate bypass valve that can be opened to fill the boiler. As of December 2020, the PRV doesn't seem to work correctly and may need to be adjusted. If water needs to be added to the system, open the green valve under the PRV until it is topped up. Cold pressure in both boilers should be about 12 psi.

In the boiler room the two red pumps that force hot water for radiant heat in the front room and the shop area. These pumps have three ports for oil lubrication. The two ports on either side of the pump get 3 drops of oil each, the covered port over the bearing needs one strong squirt. This needs to be done annually. This was last performed 2020-10-29.