When creating toolpaths for the PS1 Shopbot, there are now two distinct options:

Be careful when creating a toolpath file that you select the right post-processor!

The Shopbot does not pick up spindle speed instructions unless you have first opened up the Spindle RPM Control menu (under Tools): 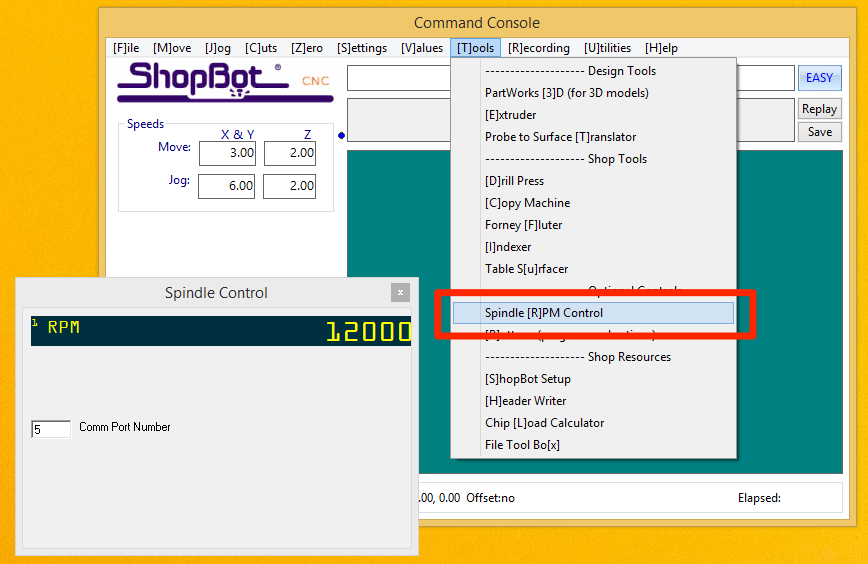 My speeds aren’t changing on my Spindle when I run the warm-up routine and during cut files. What is the problem?

The Spindle RPM Control window needs to be open in order for the spindle to change speed. If you see this window pop up during the warm-up routine or software start-up, do not close it. To open it manually, type TR in the ShopBot console (the blank box next to the ShopBot CNC logo). Click on RPM to open the fill-in sheet, and make sure that the correct VFD is selected. Start when SB3 start is set to 1, and the Hz scale is set to 60 for a V1000 spindle and to 100 for a 74X spindle.

The RPM Control window is not available on software versions earlier than 3.6.X.

Perhaps the fact that this can be done via console means that it could also be added to Gcode files by the post-processor? I'm not really sure. I did just notice this, though, a bit lower down in the FAQ:

If the VFD isn't reflecting the RPMs set in the control window, clos SB3, backup and delete shopbot.ini in "C:\ProgramData\ShopBot\ShopBot 3". Reload SB3 and it should work.

This can be accomplished in one of two ways:

2) Navigate to C:\Program Files (x86)\ShopBot\Virtual Tools. Open this file with a text editor like Notepad or SBEdit. Edit this one line of code:

Change the last number, which is a zero, to one. It will now look like this:

Save the file, close and reopen the SB3 software to see the changes take effect.

This needs to be done only once for your Shopbot login.